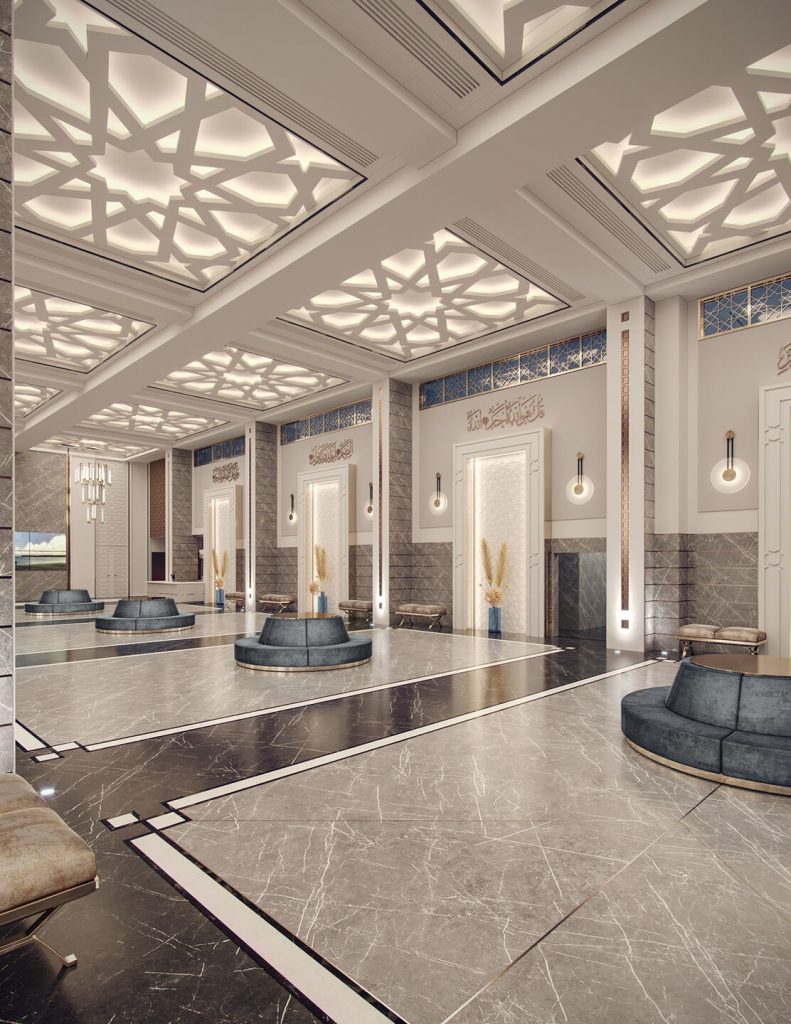 In today’s technology-driven world, families and communities are on the lookout for spaces that can help build and develop interpersonal relationships. Making connections through space design is one of the achievements of the Memphis Islamic Center in Memphis, Tennessee.

This family center caters to the social, civic and spiritual needs of the growing population of Muslim families in the Memphis area. The center is situated on a beautiful piece of land in the heart of Sheldon county in Memphis. The family center comprises a multitude of sports facilities, multi-purpose halls and recreational facilities for the whole family.

At the heart of this endeavor is the mosque structure, which consists of a main lobby, a large prayer hall, banquet hall and service areas. We performed Architectural and Interior Design of these main areas, giving each an individual characteristic that would provide an uplifting space for worship. 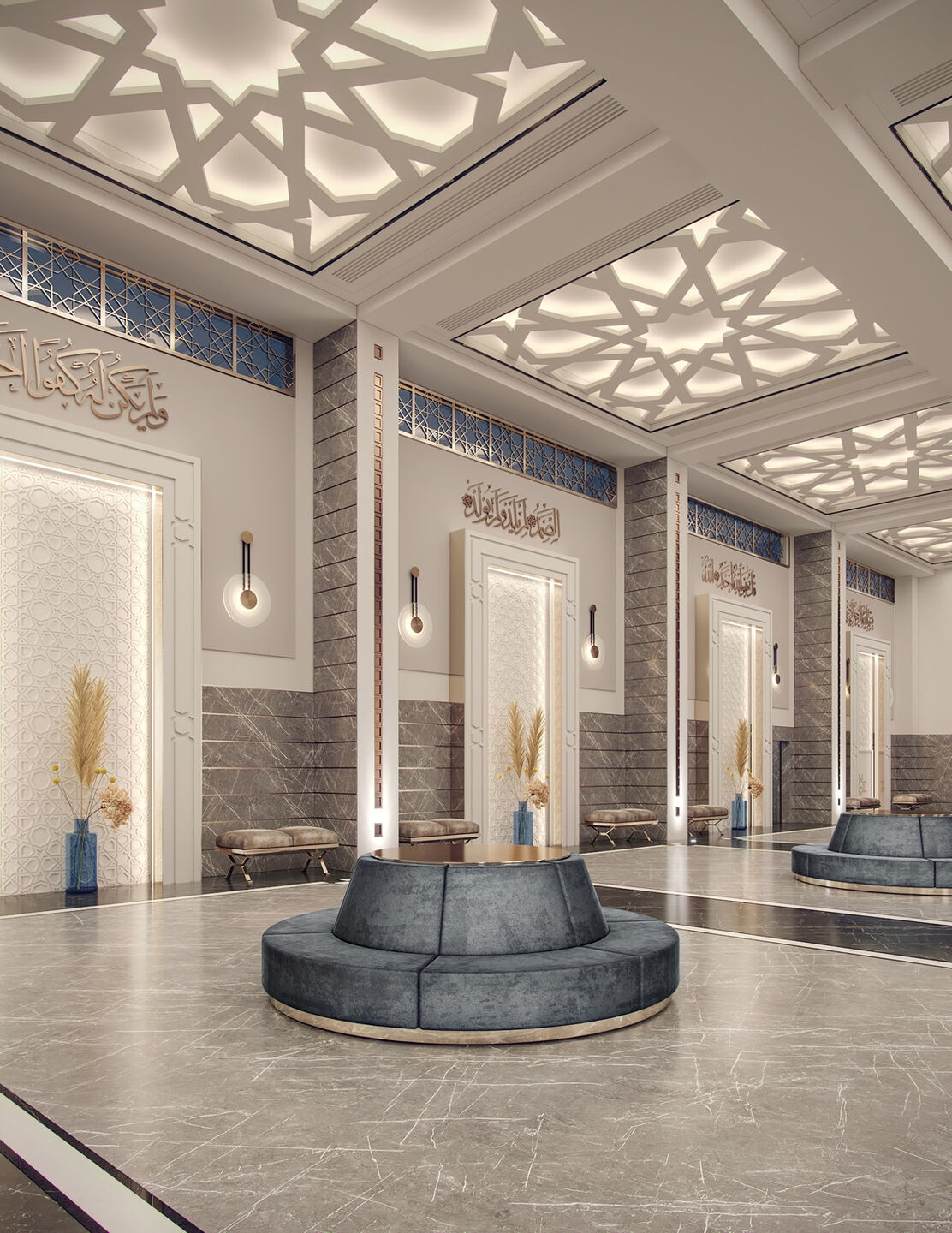 The main lobby is the heartbeat of this Masjid interior design, sitting at the center of a network of corridors and sub-corridors that form its arteries. The soothing and inspiring interiors were Designed to pay homage to the principles of Islamic architecture. 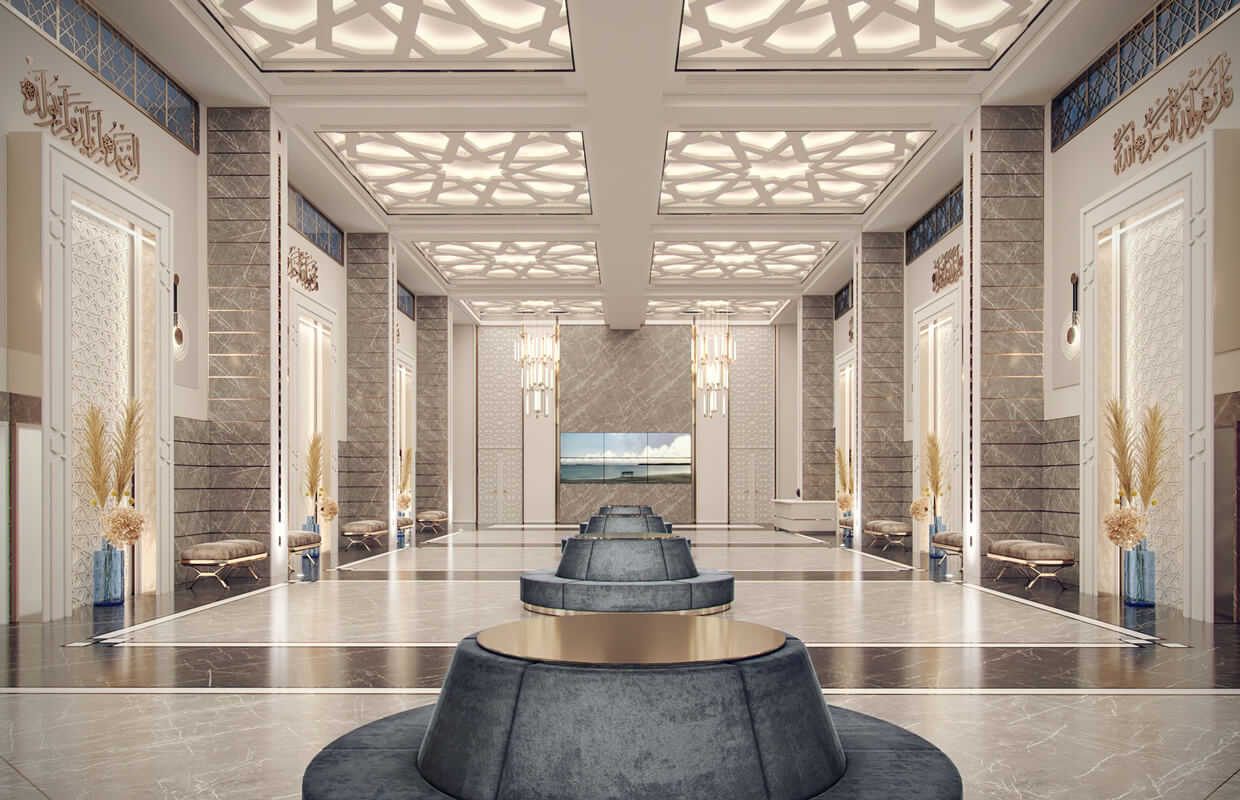 Geometric forms dominate the interior décor, from the backlit patterns on the ceiling to the tall, majestic square archways and the geometric tiling patterns in the flooring. Neutral shades of tan and beige are chosen for their calming influence. The creative interplay between light and dark shades of brown adds visual interest to the grand double-heighted space. This interest is further emphasized by the use of multiple light sources that draw the eye upward toward the softly lit ceiling. The diffused light from the concealed light fixtures infuses the lobby with an inviting glow that induces peace in the hearts of those readying themselves for worship.

Plush sofas and benches upholstered in blue and tan velvet add a touch of luxury and comfort to the lobby. The blue velvet adds a splash of muted color to the otherwise sedate lobby. Quranic verses in a gold-plated finish add stylistic ornamentation to the doorways. The blue and gold accents are mirrored in the floral arrangements that grace the square arches. Clerestory windows above the square archways also emphasize the gold accents with their antique brass frames.

The characteristic geometry of Islamic architecture is subtly used as a directional guide. Arranged in strict orthogonal symmetry, the central seats and adorned archways (which are framed with slim columns) direct worshippers toward the end of the lobby. The columns are immaculately clad with khaki-colored marble, creating a gentle rhythm that guides people to the doors at the end that lead into the prayer hall.

The prayer hall is a vast, simply furnished room that focuses the mind on prayer. The only adornment is the Qiblah wall, which is designed as a carved niche toward which the congregation faces to pray. Decorated with khaki-toned embellishments and infused with warm light, the mihrab creates a feeling of peace and humility among those who pray in the hall. 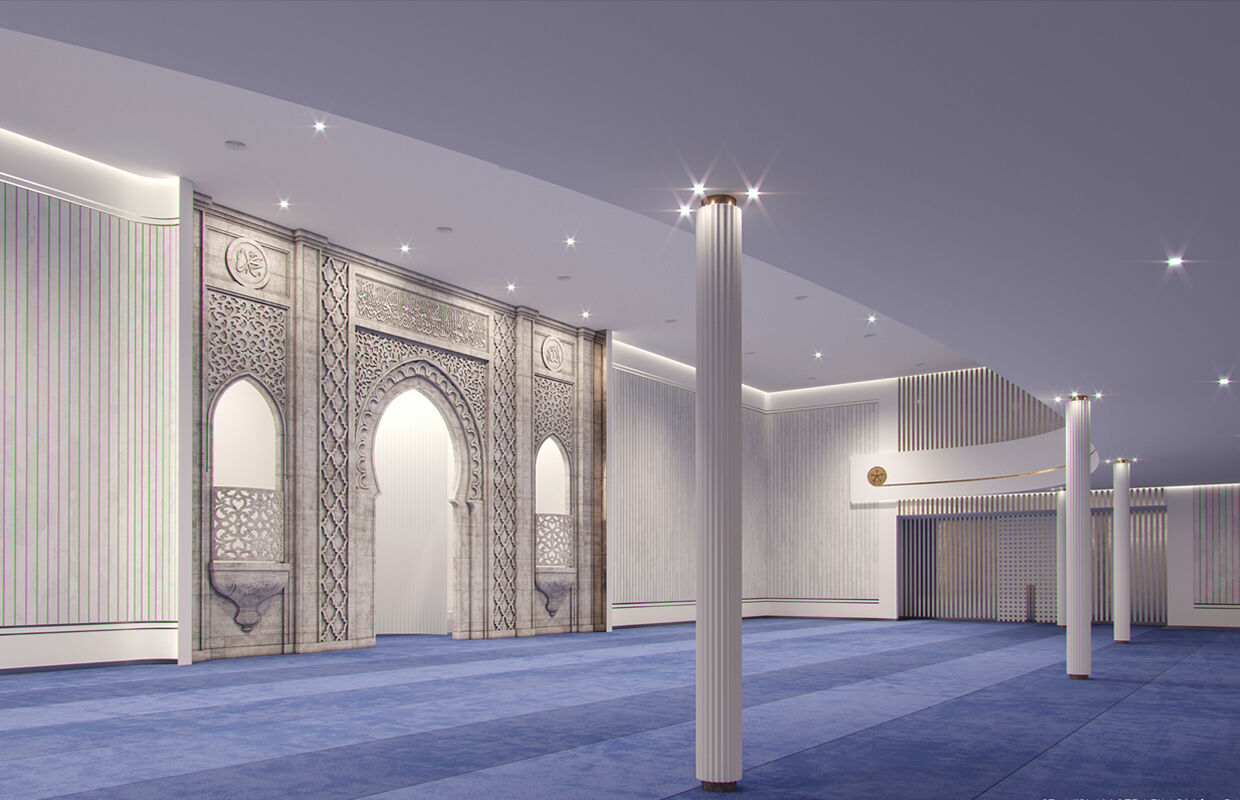 The lower-level prayer hall is designed for male worshippers, while women can access the mezzanine level through a side entrance. The gentle sweep of the mezzanine level with its transparent safety railing provides a visual connection with the Mihrab and the Imam during prayer.

A soothing blue carpet with a horizontal striped pattern indicates the rows for prayer. The rear wall of the prayer hall is designed with floor-to-ceiling bookcases lined with holy books that provide a wealth of information for interested minds. These bookcases are separated by patterned walls with gold accents; the blue and gold accents carry through from the main lobby, tying the spaces together.

The gracefully curving mezzanine is supported on slender cylindrical columns, which ensure an uninterrupted view of the subtly decorated Mihrab and the Imam during prayer. 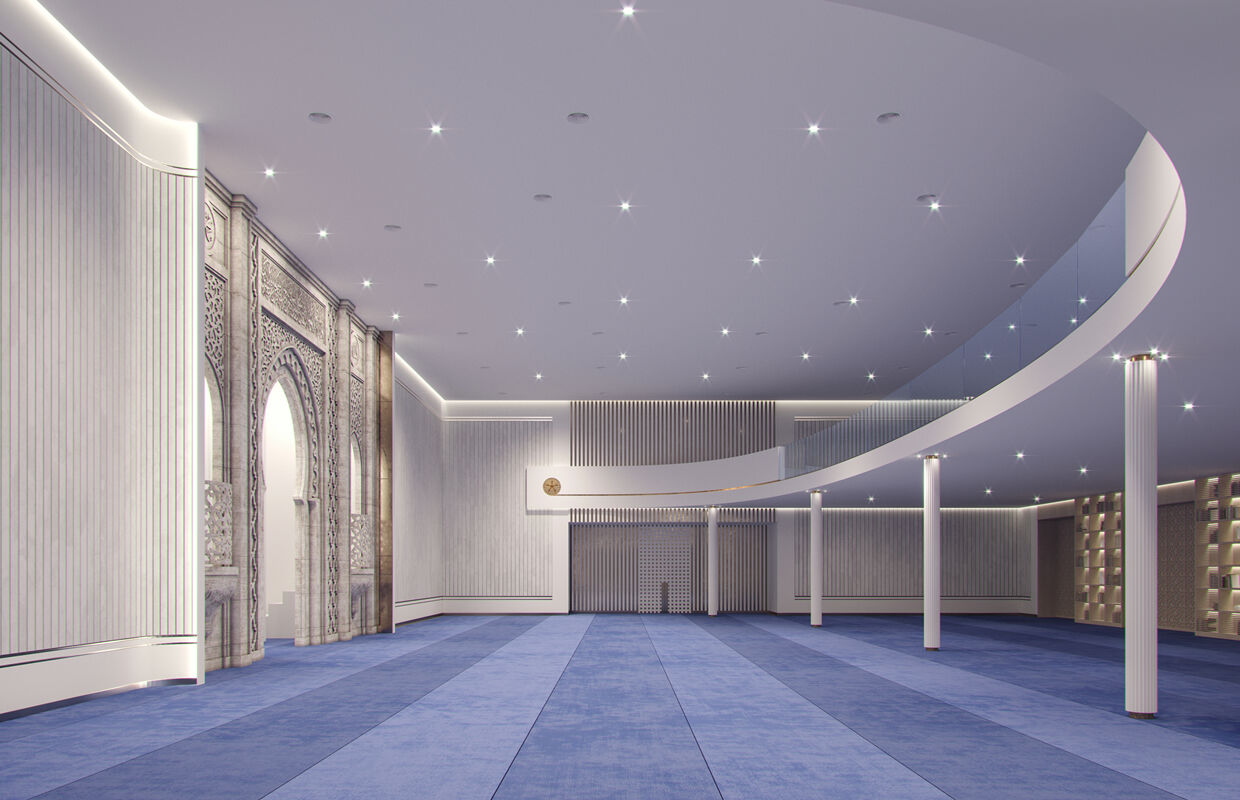 The lighting is soft and muted to add to the atmosphere of tranquility, and the bookcases are backlit to create a warm glow. Flush-mounted LED ceiling spotlights and concealed alcove lighting in the ceilings eliminate glare from the light source while illuminating the space with calming diffused lighting.

The deliberate simplicity of the design is intended to reduce distractions and help people focus on the act of praying itself.

To the rear of the main lobby is a brightly lit banquet hall that can cater to large events such as family gatherings or meetings. The décor is bright and cheerful, designed to stimulate conversation. The gold and blue accents, prevalent throughout the Masjid interior design, are carried through to the banquet hall with blue upholstered chairs and gold accents on the walls and ceilings.
A raised platform at the front of the hall acts as a stage with a large screen for presentations. This screen is suspended from an exposed gold-finished ceiling that picks up on the gold patterned panels that adorn the walls. Hidden lighting provides ample illumination above the stage. The geometric patterns on the ceiling are reflected in the flooring. The attention to detail is evident in the diamond-shaped modern chandeliers that emphasize the use of geometry. 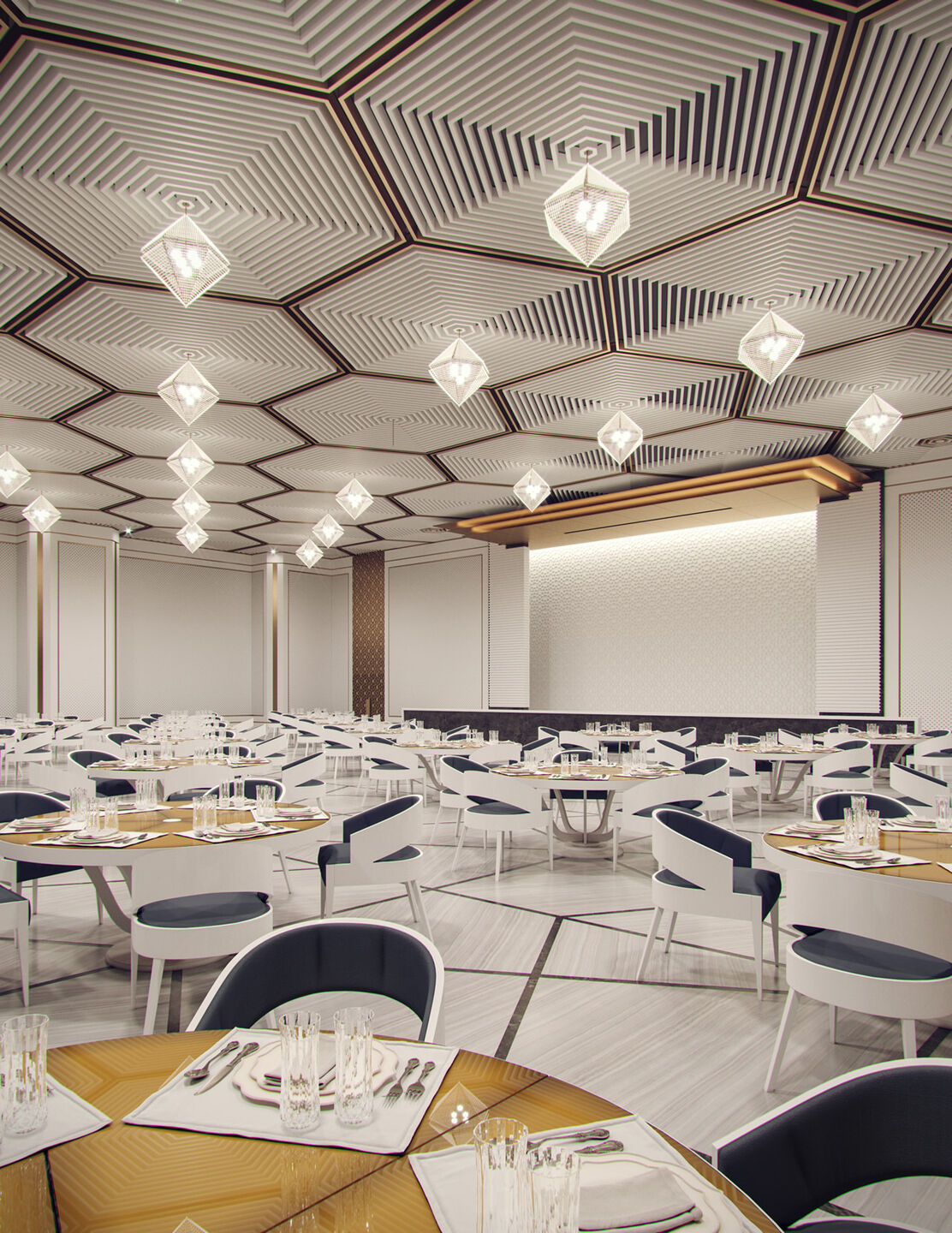 The color scheme and simplicity inherent in the design are continued into the service areas. The faucets in the wudu area and bathrooms are finished in brass to match the gold accents in the design. A simple rectangular platform provides seating in the wudu area.
The Masjid interior design uses soothing colors, clear geometry and simplicity in design to create a family center that is an ideal place for families to gather for both social celebrations and religious functions. 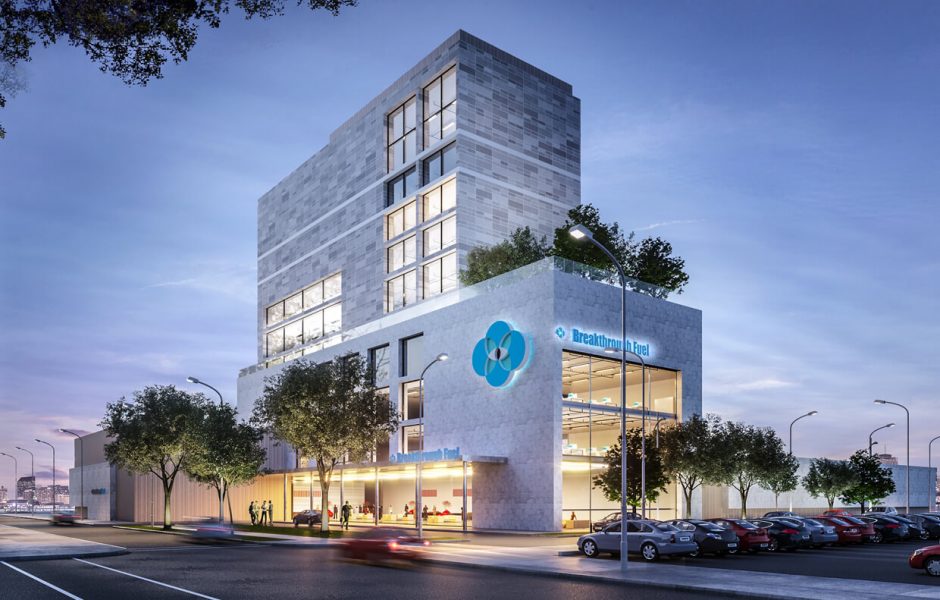 Mixed-use developments support a variety of functions aimed at enhancing cultural diversity. They result in increased socio-economic, social and environmental 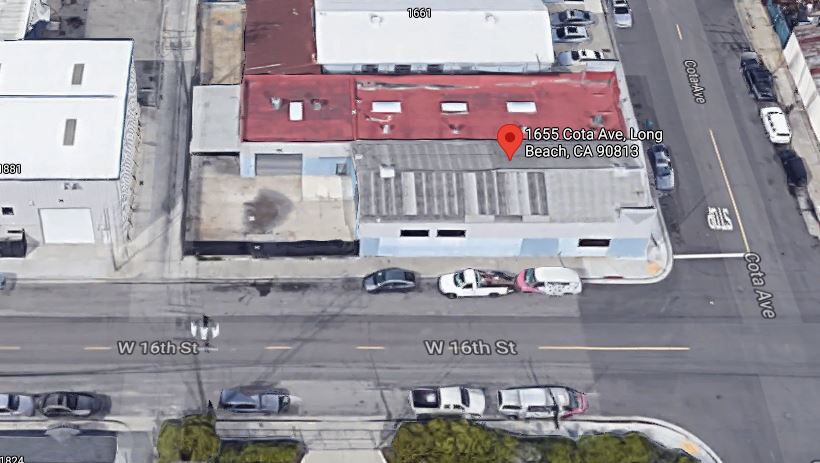 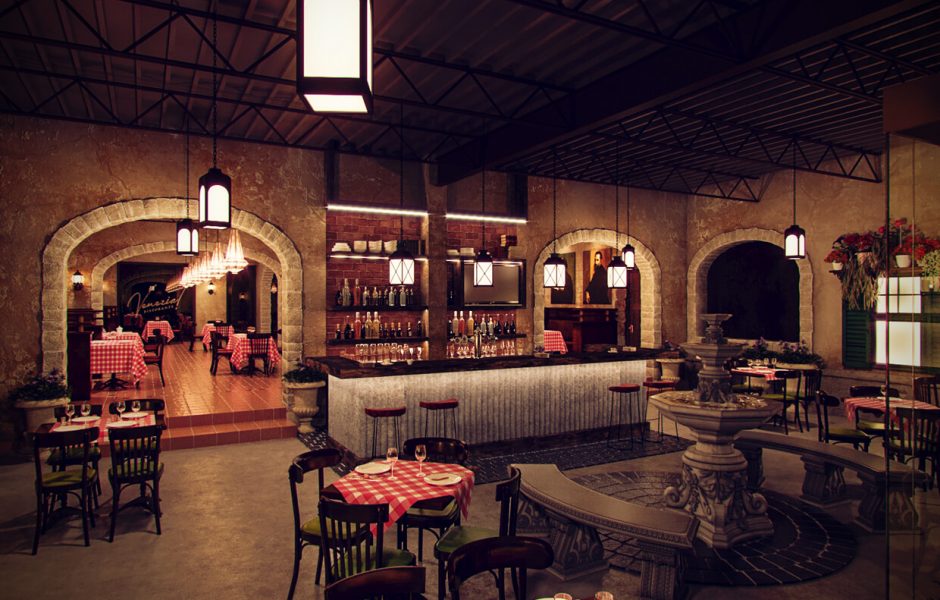 Venezia is a family-owned Italian restaurant located in Alabama. It has a total surface of 3,000 square feet. It’s located